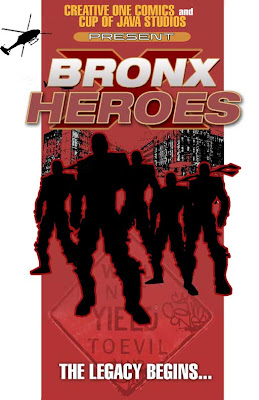 From the creative minds of Ed Mouzon, Gary Camp, and Ray Felix comes “Bronx Heroes” a three part mini series featuring stories from four generations of crime fighters. Our series begins with the legend of Jonas Bronck and his apparent pact with the Native Indians and for generations heroes  emerge from this union.
The 1st story starts in New York City around the slave-trading period, featuring “The Runaway Slave” as he struggles to gain he’s freedom from his captors and his restless search for his beloved family. The 2nd tale deals with an immigrant boxer turned crime fighter known as “The Brawler” we see our hero fighting crime and also trying to survive during the great depression.
From the depression era to the turbulent 1970’s of South Bronx, we introduced a Vietnam veteran who 's only goal is to straighten out his old neighborhood, readers we witness his  transformation into a militant hero named “Brother Bx”. Finally rounding up the series we have the vigilante anti-hero  only known as “BX” who will introduce readers to the violent underbelly of the Bronx. We hope readers will enjoy reading the many journeys through out the decades of the Bronx Heroes.
Stories By Ed Mouzon, Gary Camp and Ray Felix
Art by Ed Mouzon, Gary Camp, Ray Felix
Art by Luis Sierra and Edwin Shan
Covers by Gary Camp and Ray Felix
Posted by Gary Camp at 8:30 PM